On the 11th of May
we adopted a kitty.
(That rhymes if you pronounce “kitty” as “kit-TAY”)
She was a birthday present for my sister Carrie,
and she christened her new pet May.
(That also rhymes if you pronounce “Carrie” as “car-Ray”)
She was super shy and wouldn’t come out from under Rhyan’s bed for the first couple days except at night, when she roamed around the house. (Supposedly, as I never actually witnessed her in the act.)  But she has now gotten more comfortable, lying on top of Rhyan’s bed in the sunlight, or sitting between her bed and the sliding glass door… Watching lizards, birds, and the dog.  What a life.
Anyway, she will now let you pet her and nuzzles our hands if she wants to be loved.  Also, I forgot how fun it is to play with a cat!  Hands under the blankets, string, and hands on top of the blankets, she’ll chase them all.  Carrie took these pictures, (with her phone) so I can’t claim them, as much as I want to. 🙂 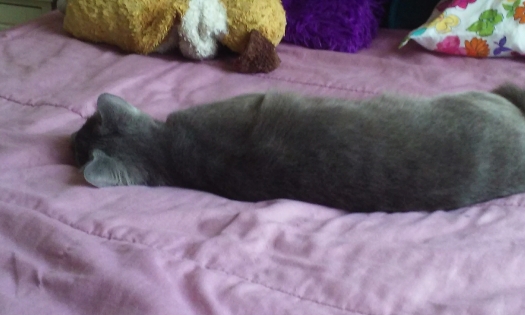 She is so relaxed, yet always alert, as cats seem to be.  I took some pictures of her recently, but haven’t uploaded them to the computer yet so am unable to show you all their majesticness… But I will soon, never fear!

P.S.  Leo hasn’t reacted strongly yet, but he also has been separated from her pretty much the whole time.  He’s more interested in her food. 🙂

6 Replies to “May Who Came In May”