I only got 3 comments with other situations that demonstrate possible nerdiness.

But, I want to celebrate the 3 people who came up with great answers on the spur of the moment. 🙂

Thanks, guys, for your contributions!  I believe that, in that case, though I don’t quite have 12 bookcases, I still count as a nerd.  How about you?

Now, I have more followers — and active ones at that, so, what can you come up with?  It doesn’t have to be something that defines you as a nerd, but something your family or friends does/says.  Now that you have some great examples, I expect some sort of participation. 🙂

You are elated when given new school supplies.

You have to go down the pens isle every time you go to a store.

Your heart warms when someone says, “Wow, you’re so smart!”

Your books have to be over 300 pages. (Minus pictures)

You have perfected your evil laugh.

You reference books that most of your friends won’t read for years.

We have all witnessed things that assure us and/or our friends that we (or they) are hilariously nerdy, so please add more of these unmistakable signs in the comment section below.  I’ll update the post with your suggestions credited to you once I get at least five unique comments, but I won’t make the comments public so you won’t know where you fall in that quota. Mwahahahahahaha…… *cough* sputter* cough* *regains composure like nothing happened* 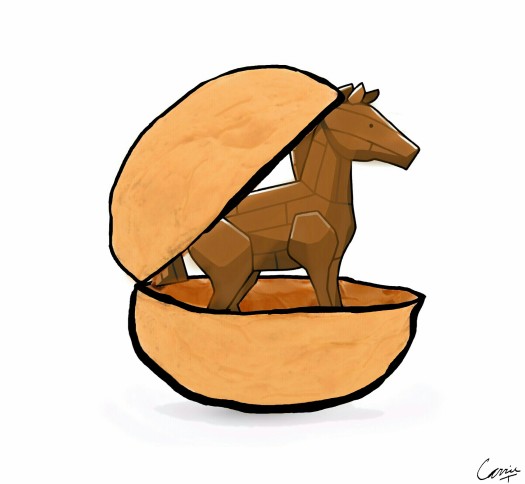 A long time ago, on a mountaintop far, far away, the Greek gods were throwing the party of the century. I think they had just won a war or something.  They tended to do that.  Anyway, Ares decided that it was just too happy and boring, so he decided to liven things up.  He created a golden apple and threw it into the midst of the gods, saying, “For the prettiest goddess.” Hera, Aphrodite, and Athena all claimed that honor, of course, and cue the catfight of the century. Eventually, the three of them decided to let an unbiased third party make the call, so they plucked a more-handsome-than-normal shepherd, Paris, off of his sheep-herding mountaintop and hastened to bribe him.  Hera, the queen of the gods, offered him power, Athena, born out of Zeus’ head promised him wisdom, but Aphrodite promised him the prettiest mortal woman on the face of the earth.  Surprise of surprises, his heart won out over his head or ambition. *sigh*
The one, eensy weensy, teeny tiny, itty bity little problem was that the girl in question was already married.  To a very powerful man.  But, that didn’t stop Diana!  She kidnapped the lovely lady in question, Helen, from her home in Greece, and Paris was instantly head over heels in love.  The couple settled down in Troy, where they expected to live happily ever after.  That… Didn’t happen. Her previous husband assembled a great army and pursued his taken.  A great battle ensued and raged on for 10 long years. There were great casualties on both sides with even the great Achilles’ heel shot and him dying. The Greeks were ready to leave, but a general named Odysseus had a plan.  He constructed a giant, hollow, wooden horse and hid a handful of his best men inside.  Then, the rest of the entire Greek army sailed away. The Trojans thought that it was a parting sacrifice to the gods, a consent of defeat, so they decided to bring it into the city.  Unfortunately, it was too big to fit through their city gates.  The genius solution that the city leaders came up with was to tear down part of the walls! Yay!  One priest was opposed to this plan, but he and his sons were strangled by giant water snakes shortly after he raised his voice in protest, so the leaders went on with their plan.

After the horse was inside the city, the Trojans threw a big party (duh).  This left them all incapable to fend off an attack, so that is when Odysseus sprung his trap.  His men leaped out of the belly of the whale (horse) and took the sleeping city by surprise. They recaptured Helen and burned the city. Yay!(?)

That’s the story of the Trojan War in a rather large nutshell, but hopefully more interesting than how you learned it in school. 🙂  If you guys liked this and want more nuts, give me some ideas in the comments’ section and I will get right on it!

Is it just me or does Marvel like to use alliterations in its character’s names?  On the other hand, DC Comics only has Clark Kent, and even that only works audibly.  I think perhaps it makes it easier for people to remember the character’s names, hence giving the company more popularity?  It is easier to remember Peter Parker than Luke Cage…
Anyone have any other theories on why they do this?  Or any other alliterationy names? (I know, not a word.  Don’t judge me) 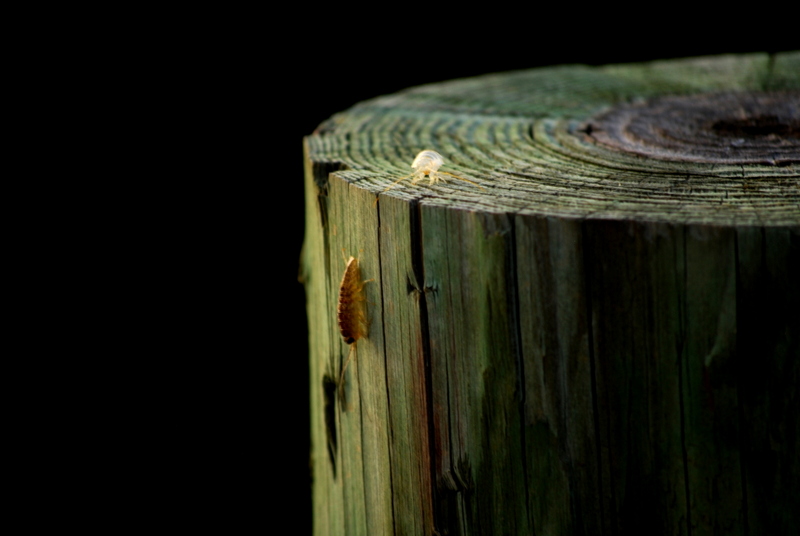 Alas, I have been a bit lax on posting regularly.  But here are some pictures as an apology.

Our story starts on a Tuesday afternoon when I was sitting in our front yard waiting for my dad to pick me up, having just finished waving goodbye to the Gonzalezes, Zoe, and Rhyan, who were carpooling to basketball practice.  I was contemplating heading back inside to wait in the comfort of the AC when I noticed these little tiny grasshoppers hopping on the blades of grass around me. (puns intended)

For scale’s sake, here’s Google Images’ example of the length… for artificial turf.  Oh well, that’s about the length of our lawn that day.  That was one teensy-weensy ‘hopper.

Then I turned my attention to this fluffy grass swaying in the wind. 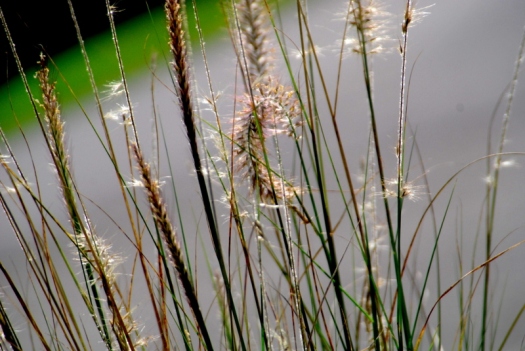 Dad soon picked me up and on our way to his house, we suddenly saw a Red-Shouldered hawk on the telephone wire!  Dad slowed the car down to a crawl, (since nobody was in sight) and I leaned out his window almost sideways to try to get a few shots. Here are the results! 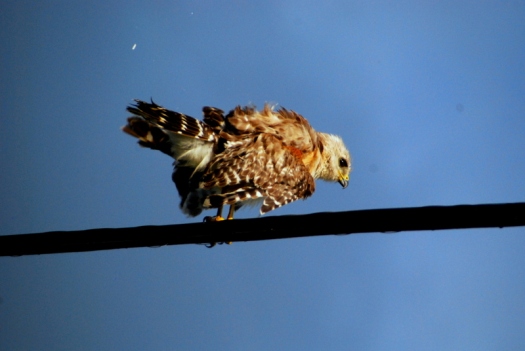 Then he flew away to a nearby sailboat.  Living in Florida, people. 🙂

We continued on home, but again were stopped for aviary reasons.  This time the welcome culprit was a brilliant male Cardinal.  I can’t remember if I got out to take these or not, but I love how they turned out anyway! 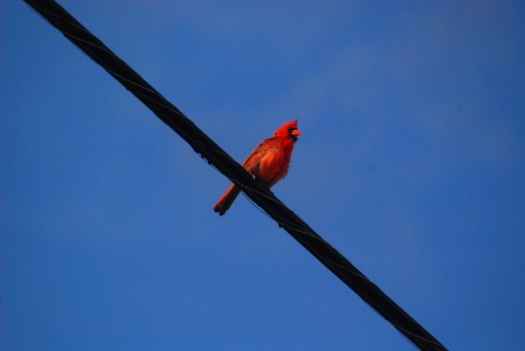 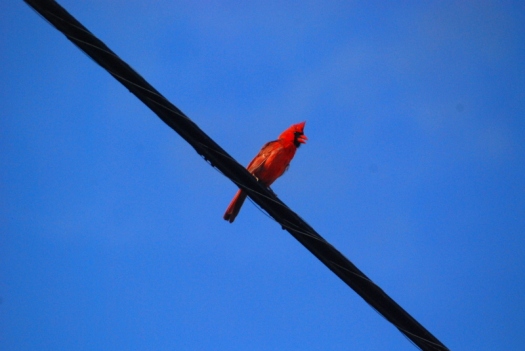 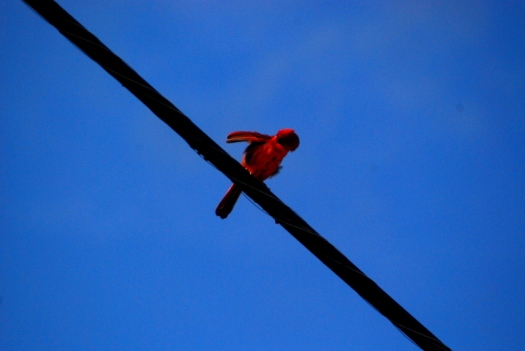 When we finally got home, Dad suggested that we test the limits of our cameras.  The shooting limits, not endurance or something.  First on the list was how close could they focus.  To do this we set up a die on an attachable laptop cooling pad.  Something like this: (again, thanks to Google Images)

The resulting picture was this, with my camera roughly about a foot and a half away.  Dad, if you remember the exact measurements, feel free to tell me. 🙂 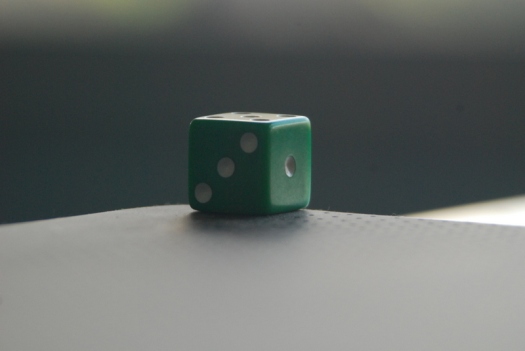 Next with a ruler/level and accidental hand for reference.

Without either arm or ruler. 🙂

We had gone to Tijuana Flats for dinner, and Dad had told me to keep the end of my straw wrapper.  I was puzzled, but he offered no explanation.  We had also walked outside and picked some moss off of a branch.  At that point I became even more confused.  A pebble was also collected.  But when we went inside the house, he explained.

He wanted to try something that he had seen somewhere.  He couldn’t remember where, otherwise I’d include the link.  It was where you cut off the end of a plastic cup and tape the slimmer side of the cup to your lens, forming a funnel type attachment.   Then you can take some fun macro shots with less background.  Now, my Tamron lens is not a macro lens in the least, but I was game at least to try.  The small objects were going to be our subjects, which explained his earlier apparent madness.  Apparently though, you’re not supposed to see the cup in the pictures…  Not quite sure why my camera showed it, but it did have a neat effect.
You can have your own opinion, but I think the moss turned out the best.

Dad had some assorted absolutely necessary items on the table, which reflected colors into the shots via the plastic cup.  We used these to our advantage.

Then without the laptop pad.

After tiring of these subjects, Dad went out to the pool and fished out some tiny bugs.  Not really sure what they are… anybody know? 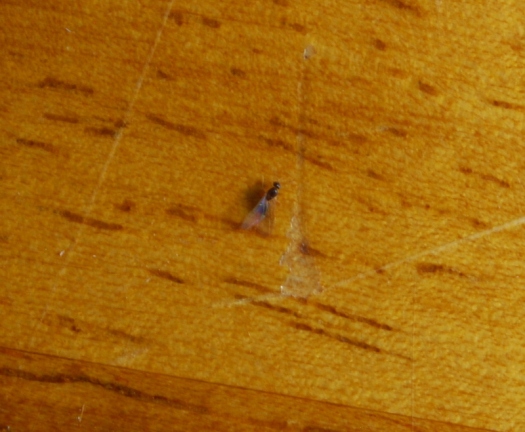 Then we went out to the dock and took pictures of the clouds. 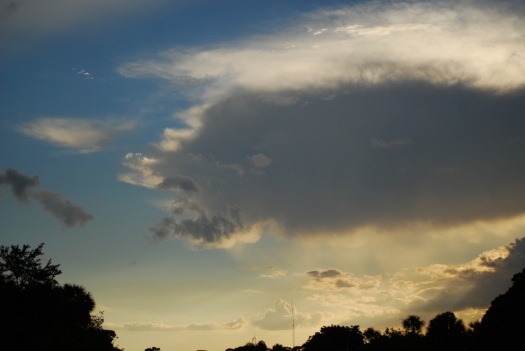 While we were out there we saw this on one of the posts.  Some type of bug shedding its old exoskeleton for the new skin beneath!  Dad and I were excited and I marveled at God’s wonderful design. 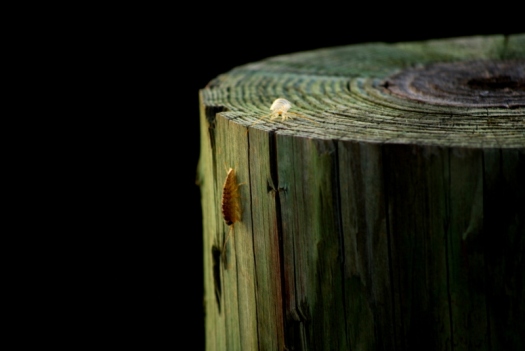 That’s a good final picture I think.  That was my night, way back on June 22nd. 🙂

I found this picture and realized that this it is a good example of human behavior.  We tend to blame others, or other things, for our problems.  Obama, atheists, guns, spoons, etc.  I do this a lot… as I can’t seem to get the hang of walking around my house without stubbing my toe on the coffee table or chair or even a wall.  Usually I blame the piece of furniture instead of admitting it was my own fault.  Thankfully, my mother has been correcting me on it and waking me up to the fact that it is not the furniture’s fault that I ran into it.  It was just minding its own business when, WHAM!  I run into it.  So I’ve actually gone and apologized to the furniture before.  Hehe.
But back on topic, our government has made rules concerning gun control, but I don’t think that that is going to solve much.
On top of that, we’ve gotten paranoid about it.  For example, take a look at this. 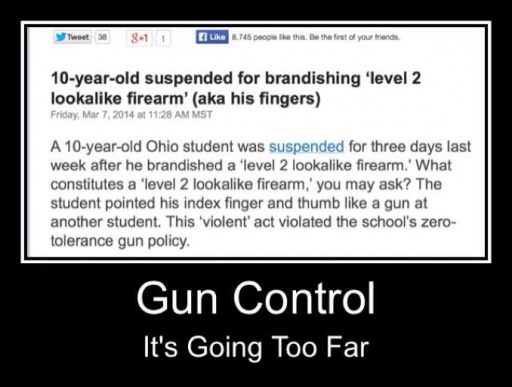 George Washington would be appalled at this.  He said,

“A free people ought not only to be armed, but disciplined; to which end a uniform and well-digested plan is requisite; and their safety and interest require that they should promote such manufactories as tend to render them independent of others for essential, particularly military, supplies.”

Instead of gun control, (taking them away) we should be teaching people how to use them safely and responsibly.  Then it is the people’s fault, and not the gun’s, when people get hurt.  What do you think?  I’d love to hear your thoughts.

We were playing a friendly game of 4 on 4 soccer with some friends of ours (hi Emily!) on Monday when I this popped into my head.  I said it over and over so I wouldn’t forget it, and I didn’t!  Hooray!  I’ll leave you to make your own conclusions about what you think it means and if you agree.  I’d love to hear your thoughts!